Basic and primitive these are the words that comes into my mind when i think of the backstrap loom. a description not knowing that the fact that some of history's most beautiful and complex textile have been woven on this simple arragement of sticks. A simple loom, yet mysterious.... the most frequent question i ask whenever i see someone weaving is..."All those sticks where do they go and what do they do?" the puzziling collection of sticks and tangle of yarn magically comes to life and create a loom whenever the weaver sit and wear the "sakgetan", tensions the warps and start to weave. the backstrap loom is ideal for those who lack space for floor loom, would like to be able to take their weaving when they travel, or don't have money to invest on more sophisticated equipment. I am very luck to be living in a part of the world where backstrap is still in use today.Master weavers taught our group the technique in backstrap weaving. In this article, I will show you the basics of backstrap weaving while teaching you how to crete one. No one actually knew where or who started weaving, but it is believed that weaving came from the lowlands. it was then introduced to the highlands by Igorots who went to the lowlands and learned the art of weaving. the Igorots, in turn, taught their kailyans. Later, they again taught their lowland brothers.

According to stories, the first people from Tadian who learned how to weave are from Balaoa. as they developed the art, they also created their own designs. Each design imbued with different meanings. The designs are used on different occasions and are still being used up to this day.
Getting to know the weaving loom:
Steps and Materials
First step: The pudon, this where thread is rolled into a ball. this makes it easier for the weaver to pull the thread when warping. Warping- the process of extending the yarns in a loom 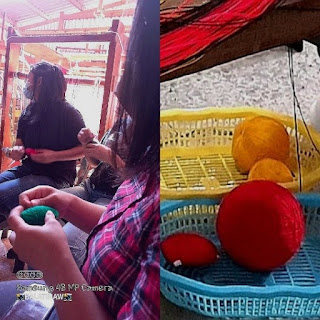 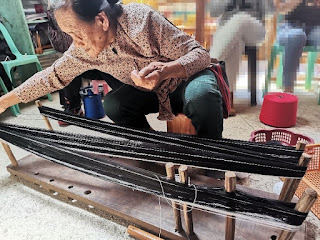 Second Step: The saud this is where you uniformly stretch the threads in the saudan to form the warp design. 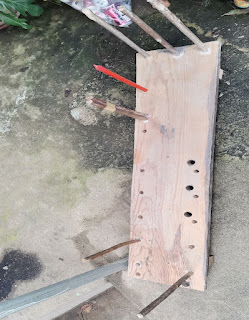 Saudan- a wooden plank with stakes used to uniformly stretch the threads to form the warp design. The width of the fabric depends on the count of the sag-ot or threads. Third Step: placing of the taknangan in between the nylon threads, and leletan before transfering the sag-ot to the Gadannan. 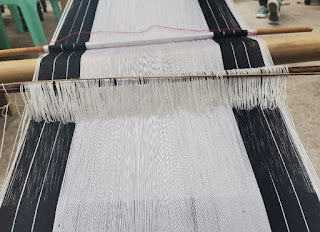 Taknangan- is connected to the heddle string with the weaving thread, used to come up with distinct patterns. 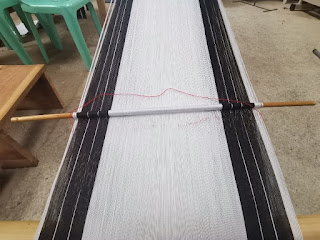 Leletan a material used in backstrap weaving. This is a shiny brown stick used to control the movement of the thread by wrapping the threads around it. 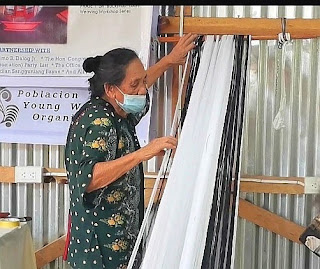 Fourth Step: Transfering the sag-ot(the thread being weaved) to the Gadannan. 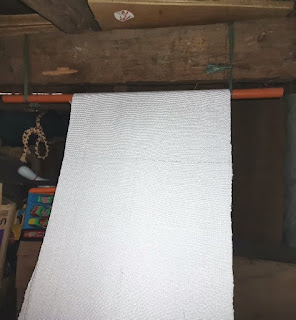 Gaddanan is a backstrap weaving material. This serves a very important role in weaving because it holds the sag-ot so that when the ipitan pulls the sag-ot it rolls around it. Fifth Step: Spreading the threads equally on the gadannan and checking for any tangled threads before weaving.

Sixth Step: clipping the atipan in between the warp. This helps the weaver stretch the warp when weaving. Atipan-wood clipped to hold the threads in the tummy area of the weaver. 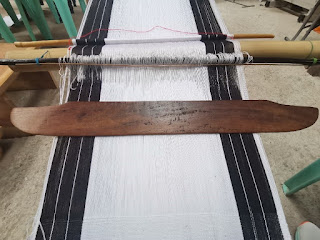 Baliga- The baliga is used in backstrap weaving. It is primarily used to “sedsed” or tighten up the vertical threads coming through in and out of the horizontal threads.

Sakgetan is a material used in backstrap weaving. This is worn around the weaver’s waist to support the back of the weaver who controls the sag-ot (thread) by leaning backward or forward. Design

-X(shield), snake and man. genuine attire can be determined by the arrangement of the X, snake which  should be chasing a man.
- Shukyung (arrowhead or spear) this is to denote protection from evil.
-Tinatagu (human) , Bituwon (star) and Uweg (snake) employ to generate good omen on the deceased.
-tiktiko used to represent moratrs and doubled lined diamonds are perceived to represents rice grains. The ayes of the utmost repected ancestors. 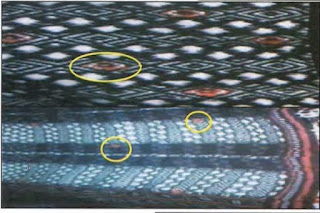