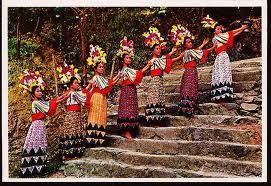 While the majority of the Philippines' cultural dances are formed by adding the influences of foreign groups to their own traditional dances,

there are corners of the country where no foreign influence has yet changed the traditional dances of the region. These areas are in the hills and mountains of the country and dance is used as a form of worship, bringing a special and significant meaning that goes beyond basic folk dance. Dugso is a stand-out among tribal dances, and it is choreographed in portions to please and entertain the various tribes' gods and deities.